Stratford, Connecticut – The authorities have arrested Edward Johnson from Bridgeport after stopping his vehicle for a minor violation. However, what they later discovered in Johnson’s pants was enough to put him behind bars. The officials charged the man with possessing and planning to sell the narcotics that were discovered. 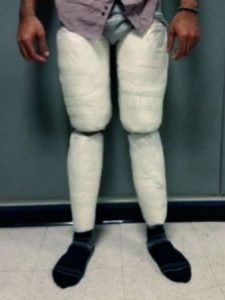 The Narcotics Vice and Intel Unit sent out a patrol squad in Stratford Avenue. Then, the squad spotted a minor traffic violation.

When the detectives stopped the driver and asked him to step outside, they noticed something suspicious.

Captain Frank Eannotti stated that the detectives saw a strange black object protruding out of Johnson’s low hanging pants. The plastic object in question caught the officers’ attention, and they decided to pat Johnson down.

According to Eannotti, the detectives inspected the suspect’s pants. They noticed that the concealed black object was “not part” of Johnson’s reproductive organ.

When the detectives pulled out the object, they discovered a hidden stash of cocaine and marijuana. The plastic container was holding around 50g (1.76oz) of marijuana as well as 108g (3.8oz) of cocaine. The detectives immediately arrested Johnson and officials charged him shortly after.

Moreover, the bail was $150,000. However, Eannotti said that Johnson did not post it.

Some residents of Ansonia, a small place 12 miles northwest of New Haven, were appalled to find out that their neighbor was selling crack and fentanyl all over the Bridgeport area. The peaceful neighborhood was not the scene of a lot of criminal activity and is well-known for its safe streets. However, the latest news […]

On Monday, Paul Gileno, the U.S. Pain Foundation’s former CEO, has confessed to charges of embezzling a large sum from his company. This non-profit group was committed to patients with chronic pain but was later found to be connected to the opioid crisis. The former CEO was facing fraud and tax charges. In total, he […]

Sharlene Mansfield was the victim of an unfortunate deadly hit-and-run that took place this week in Hartford. The 55-year-old was struck and killed in the vicinity of 400 Hillside Ave. just before 12 p.m. The driver fled the scene, but the car has been identified as a dark grey Hyundai Sonata with AU8835 plates. The […]

Second Victim of Ebola in Congo

Sleeping Giant Reopens a Year Following Tornadoes That Closed It

Mercados — an Exploration of Mexican Markets and Recipes

If You Don’t Use It, Sell It